The first complete retrospective of a contemporary icon, prepared with Björk’s active creative involvement throughout.

The first complete retrospective of a contemporary icon, prepared with Björk’s active creative involvement throughout.

Björk’s contributions to music, video, film, fashion and art have influenced a generation worldwide. Here, now, is the ultimate celebration of this multimillion-selling superstar. Designed by top design studio M/M (Paris) as a slipcased world of wonders, this publication – originally published to accompany the exhibition on Björk at The Museum of Modern Art, New York – is composed of six parts:?four booklets, a paperback and a poster.

Each booklet contains illustrated texts by, respectively, Klaus Biesenbach, Alex Ross, Nicola Dibben and Timothy Morton, while the poster features the artwork of Björk’s albums and singles. The main book focuses on her seven major albums – Debut, Post, Homogenic, Vespertine, Medúlla, Volta and Biophilia – and the personas created for each one.

Poetic texts by longtime collaborator, Icelandic poet Sjón, are accompanied by shots of Björk performing live; multiple stills from music videos made by directors including Michel Gondry, Chris Cunningham and Spike Jonze; images of Björk in breathtaking costumes by designers such as Alexander McQueen and Hussein Chalayan; and shots by star photographers such as Nan Goldin, Juergen Teller, Stéphane Sédnaoui, Inez van Lamsweerde & Vinoodh Matadin, and Araki. All combine to form an extraordinary visual masterpiece, celebrating the magical world of Björk.

‘Like the V&A’s David Bowie book, this is a triumph – exactly the kind of respectful and considered appreciation a master artist merits’ – The Mouth Magazine

‘true to form for the eccentric pop star, the book is something of an objet d’art’ – Vogue

‘A real celebration of creativity … packed ‘Full of Love’ and ‘Wanderlust’, ‘Possibly Maybe’ guaranteed to make you ‘Violently Happy’. Put simply, this is definitely one to add to your reading list! Once ‘It’s In Our Hands’, we’re never going to let it go’ – iD 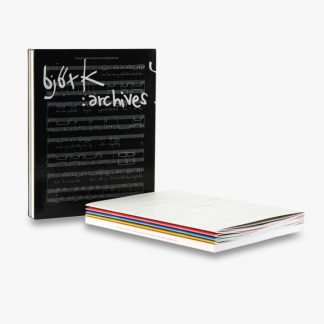