Available on CD, Vinyl, and Cassette

“Almost entirely a cappella, and recorded with choirs from Iceland and London, a throat singer and a human beat-box (Rahzel from the Roots), Medulla has little precedent in popular music. There is, though, an esoteric lineage to be traced back, from Kate Bush’s work with the Trio Bulgarka to Donald Byrd’s collaborations with arranger Coleridge Perkinson, and the more extreme choral pop and jazz records of the 1950s where sweetness and dissonance become inseparable.

Björk’s earlier records were as uneven as the push and pull of the life they reflected; since Vespertine, however, and her relationship with artist Matthew Barney, she has hit a wonderstruck seam of rapture. “Every pearl is a lynx is a girl,” she sings in Oceania, choral swoops exploding like fireworks behind her, “sweet like harmony made into flesh.”

Medúlla is playful and hymnal, sometimes surprisingly violent, often sombre but always full of awe. It’s fitting that Robert Wyatt, who also seems to float above conventional ideas about music, should lend to it his fragile coo. Medúlla may divide Björk’s audience, but, combining intellectual rigour and sensual ravishment, it is brave and unique.” – The Guardian 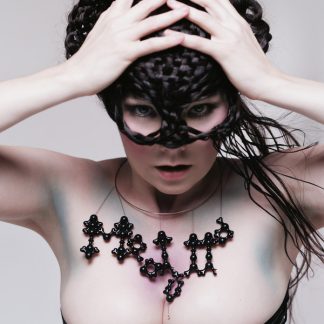