Utopia is available in the following formats:

The album is written by Björk with five of the 14 songs co-written by Arca and one of the songs co-written by Sarah Hopkins. All of the songs except one is co-produced by Arca. One of the songs is co-produced by Rabit. Björk formed a twelve piece Icelandic female flute orchestra, which she arranged for and conducted. She also wrote an arrangement for Hamrahlíðarkórinn, a choir conducted by Þorgerður Ingólfsdóttir. The album was edited and structured by Björk on Protools. It was engineered by Bergur Þórisson, Bart Migal and Chris Elms. It was mixed by Heba Kadry and Marta Salogni Salogni and mastered by Mandy Parnell.

“Utopia is Björk’s flute album much the way the darkly intimate Vespertine leaned on the celeste or Medúlla was composed mostly of human voices, or Volta had brass and Biophilia its choirs. But Utopia is, more accurately, an album of breath and wind. After a few plucks of harp on the first two songs—the arresting banquet of “Arisen My Senses” and the gentle touch of “Blissing Me”—Utopia lives almost entirely suspended in the air. Its orchestration is carried by a small flute ensemble, the Icelandic Hamrahlid Choir, Harmonic Whirlies, and a collection of birdsongs culled both from Iceland and Arca’s homeland of Venezuela.

The arrangement on the album flits and flutters everywhere, hard to grasp, much like modern classical composer Olivier Messiaen’s serialist compositions or even his ones composed to mimic birdsong. All throughout the album, we hear the singing of birds called the Montezuma Oropendola—the one that sounds like a Moog synth in a microwave—and the Musician Wren, whose call is one of a few birds that sings in melodies similar to human music. We hear all this breath rushing through metal, wood, plastic, cartilage, and muscle, all in largely minor, dissonant modes. At 72 minutes, this is the longest studio album of her career. Björk doesn’t find love with three chords and the truth, she finds love through an endless interrogation of every note there is.” – Pitchfork 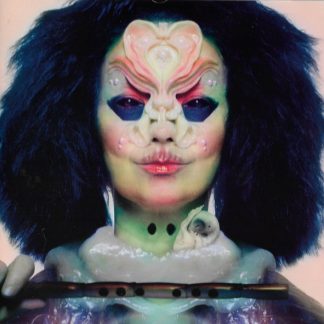