Vulnicura Strings is the acoustic version of Björk’s Vulnicura, featuring strings, voice and viola organista only – out on CD and vinyl.

The original version of Vulnicura layered the boom and crack of electronic beats with an intense vocal melody and incredible string arrangements by Björk which have been performed live with a fifteen chair orchestra. The new version is musically wholly comprised of strings, with new violin solos by Una Sveinbjarnardóttir and additional strings played on viola organista.

Björk used the only viola organista in the world to perform some of the arrangements; an instrument which was designed originally by Leonardo Da Vinci but not built until after his lifetime. The instrument uses a friction belt to vibrate individual strings (similar to a violin), with the strings selected by pressing keys on the keyboard (similar to an organ). The instrument was recorded in Krakow, Poland by its constructor Sławomir Zubrzycki and here is where the album reached completion. 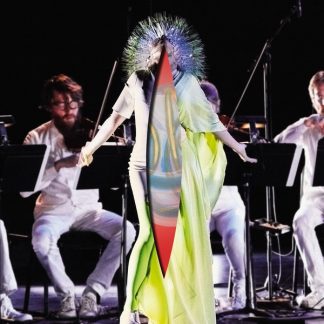 You're viewing: Björk – Vulnicura Strings £9.99 – £20.99
Select options
We use cookies on our website to give you the most relevant experience by remembering your preferences and repeat visits. By clicking “Accept All”, you consent to the use of ALL the cookies. However, you may visit "Cookie Settings" to provide a controlled consent.
Cookie SettingsAccept All
Manage consent