The Sugarcubes – Life’s Too Good

The Sugarcubes – Life’s Too Good

11 track album on CD and vinyl.

Reinventing the wheel of alternative pop, Icelandic group Sugarcubes (that boasted the mighty Björk within its ranks) burst onto the international music scene with their debut, featuring the unforgettable track ‘Birthday’.

It’s sometimes hard to recall now just how much of an impact The Sugarcubes debut single ‘Birthday’ made when it’s magical off-kilter melody first hit the airwaves via John Peel’s show in the latter part of 1987 (it took the number one spot in his ‘Festive 50’ that Christmas).

In particular, the song’s extraordinary singer/ narrator, Björk Guðmundsdóttir was the subject of much wild speculation in the UK music press. “Can she possibly be human?” wondered Melody Maker’s foaming Single of the Week review (mirrored in NME). “A record of debilitating beauty,” it continued. “Nothing this year has had us more thoroughly vanquished.”

And when the singles ‘Coldsweat’ and later, ‘Deus’ followed it, the somewhat more visceral tones of one Einar Örn Benediktsson introduced an electric counterpoint to Björk’s lustrously divine howl.

Over 1988, The Sugarcubes – courted by a UK press hungry for the scoop on Iceland’s first bona-fide indie rock sensations – thrilled, confounded, irritated and intrigued in equal measure, the band regularly pushed to explode the patronizing attitudes and expectations they encountered from the get-go.

Whatever, the band were undisputedly, breathtakingly different and when Life’s Too Good dropped in April ’88, its wild jumble of raucous pop, skewed jazz, punk, absurdist rock’n’roll, menace, sarcasm and sublimity lived up to expectations. By the end of the year it had clocked up nearly half a million sales and The Sugarcubes had almost singlehandedly established Icelandic music in the popular consciousness. It still sounds fantastic today.

By the end of ‘88 all three singles had charted in the year’s Independent Top 40 best-sellers, the album going into the national Top 40 and the band making appearances in the top five of most categories in the ‘indies’ end of year polls. 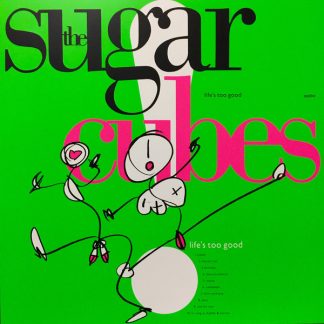